The Steyr AUG is an iconic firearm, specially in West, for the 80s and 90s era action movies. AUG 's fame lies in the fact that it is usually the first gun that comes to mind when someone thinks of a bullpup-style rifle.

In this Steyr AUG review, we’re going to put forward our expert opinion about this rifle along with its specifications. We’ll also check out how the AUG compares to other Bullpup “Assault Rifles” that are out there.

The Steyr AUG is an iconic bullpup firearm, which was way ahead of its time. It was designed in the 1960s and has been one of the most recognizable rifles in the world since its adoption by the Austrian army in 1977. The multi-configurable M1 variant of the AUG A3 platform is the latest generation of the esteemed bullpup platform.

Its appearance still looks like a rifle from the future, even though it was developed around the time of the M16 (which was adopted in 1964).

In America, the Steyr AUG was made famous as the “bad guy’s gun” in 80s action movies like Robocop, Die Hard, and Commando.

Despite it futuristic looks, and ahead of its time engineering, it has some older features/designs that could act as a negative for some gun users.

The original trigger system is very unique. The AUG fires in semi-auto mode.

The Steyr AUG should not be your first or your only rifle.

Its not because we don’t like the AUG. It has plenty of benefits, but just not for new shooters.

The Steyr Aug is one of the coolest, if not THE coolest, “assault rifle” out there. However, despite its futuristic shape and looks, it lacks some features that modern firearms have.

What we like: Compact and sleek design. This rifle just looks…. Sexy, right?

It’s a super handy and reliable rifle – if you’re looking for something that is reliable, this might be the rifle for you – especially if you don’t mind the things that we don’t like about the Steyr Aug rifle down below.

Trigger: The trigger is typical of most bullpups: it is “ok” but leaves a lot to be desired.

Operating System: The gas vents out of a gas port are just above the support handgrip on the right side of the rifle. This, depending on the ammo, can result in a decent flash and can affect any fingers that happen to cover this area.

Mag Release: The mag release is behind the magazine, which makes mag changes much slower than on an AR-style rifle

Magazines: you have to use special Steyr Aug magazines if you want the standard stock and the external bolt release. The rifle is available in a NATO configuration that allows you to use regular AR-15 magazines but you lose the external bolt catch/release. 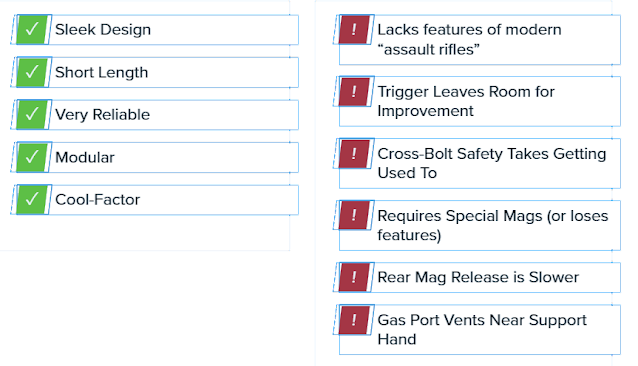 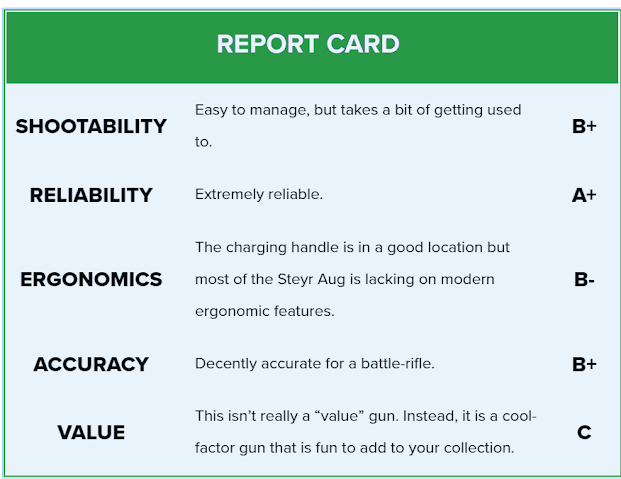 If you’ve decided to pick up the Steyr or found another firearm that suits your needs, there are some bare essentials you’re going to need to pick up in order to maximize its potential and your safety regardless of if it’s your first firearm or not.